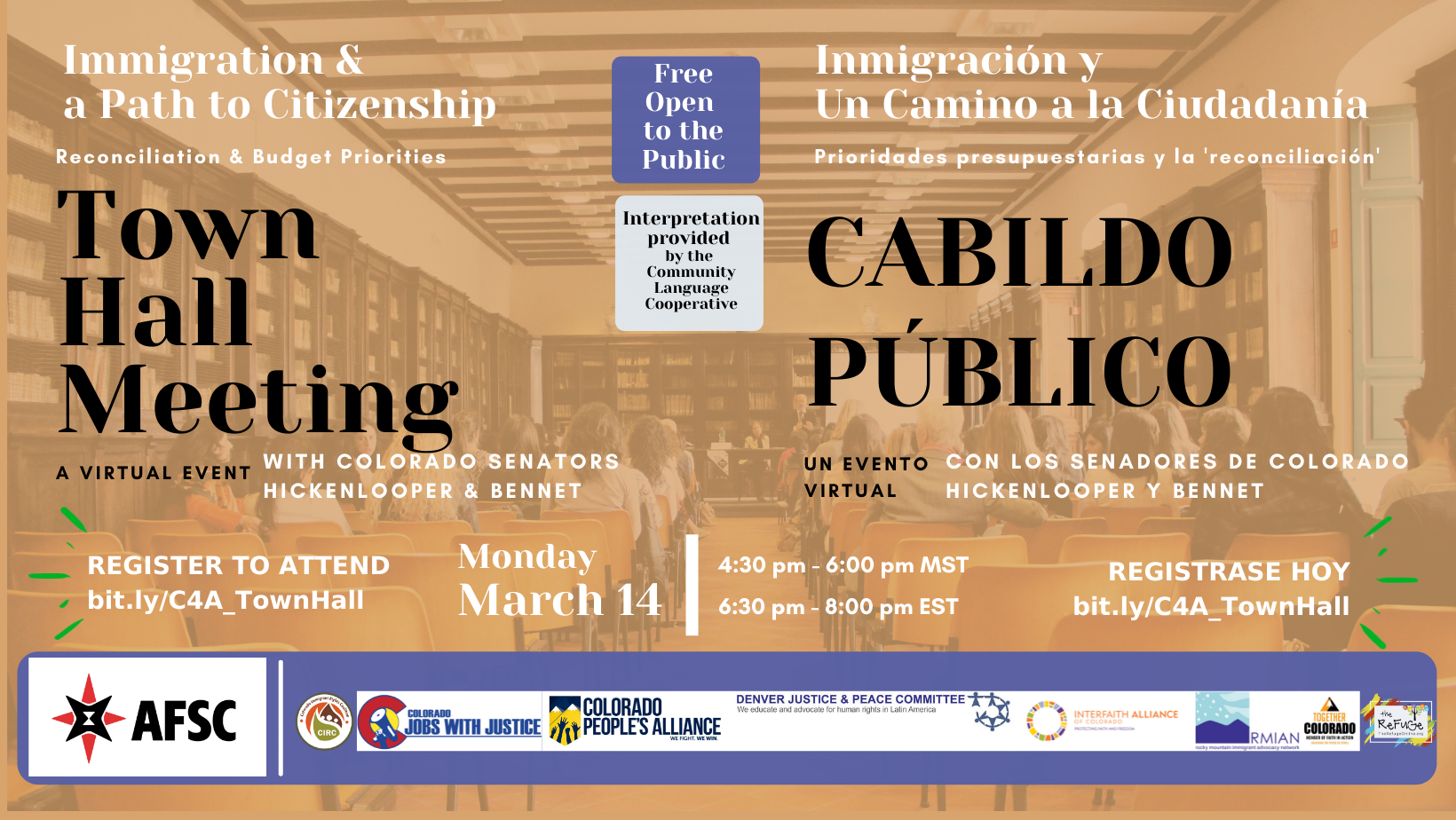 This town hall will be led by immigrant speakers and their families discussing citizenship and budget priorities.

MANCOS, COLORADO. Rosa Sabido’s three decades long fight for lawful permanent residence got a boost this week when Representative Joe Neguse introduced a private bill on her behalf. The bill, introduced in the Immigration and Citizenship Subcommittee of the House Judiciary Committee, has the potential to bring an end to the arduous journey Sabido has been on to live and work in the United States, a country she has called home for more than half her life.

Sabido has been living in the Mancos United Methodist Church for more than four years, seeking Sanctuary there when her routine stays of removal were denied in 2017. Despite incredibly painful losses during the last four years, Sabido has continued fighting for justice not only for herself but other leaders in the sanctuary movement in Colorado and across the nation.

“Over four years ago, Rosa Sabido sought sanctuary in the Mancos United Methodist Church,” said Pastor Craig Paschal. “Our church said yes because we believe we are called to love our neighbors and stand in solidarity with the marginalized. Today, we celebrate the introduction of a private bill in Congress for Rosa by Congressman Joe Neguse. We thank him from the bottom of our hearts. We stand in faith as one,”

Why doesn’t she just get in line?

Sabido has stood in all the lines, filled out mounds of forms, paid fees year after year to file the paperwork, and appeared at required immigration appointments for decades. Like anyone passionately committed to supporting her family, Sabido made honest mistakes along the way and, without proper legal representation for many of her early efforts, came away time and again facing longer and longer delays due to the endless backlog and bureaucracy, and inhumane shifts in policy.

"A true injustice has happened to one of our community members, Rosa Sabido, and I hope that with this Private Bill, we can right the wrongs of our immigration system and help her safely live in the place she calls home,” said Cortez Mayor Pro-Tem Rachel Medina.

View the full text of the bill here.

Can President Biden let Rosa out of Sanctuary?
In January a letter was submitted to President Biden with signatories representing churches, businesses, local governments and individuals across the nation. The letter requested that President Biden use his discretion to provide stays of removal for Rosa and four others living in sanctuary churches across Colorado. Unfortunately, Sanctuary leaders did not receive an affirmative response from President Biden’s team.

Various immigration bills are being passed or considered. Will these help Rosa?
Due to the complexities of Rosa’s case, Rosa’s attorney’s assessment is that Rosa is unlikely to receive relief from the direction that immigration reforms will probably take. Of course, Rosa and her attorney will be watching any developments with interest, but at this time she cannot depend on potential legislative reform as a solution for her case.

If Rosa has a Stay of Removal, why isn’t she leaving Sanctuary?

Permanent Residence is Rosa’s goal. Rosa’s own immigration history clearly shows the inadequacy of a Stay of Removal for ensuring physical and emotional safety, and a true future and freedom, for Rosa. This truth is being borne out every day by the struggles of others who have received only Stays of Removal rather than true assurance of safety and belonging in the form of Permanent Residency and/or Citizenship.

Wasn’t Sanctuary about resisting Trump? Why do we still need it now that we have Biden?

The Sanctuary Movement should not fade away just because we have a new administration. This administration is struggling to put in place human rules and procedures for immigration, and it’s just as important now as ever before to ensure that we are building SANCTUARY FOR ALL.

What is an Order of Supervision, and why is it important for Rosa to have a work permit?

A next step for Rosa is to request an Order of Supervision, and to notify the DHS and Colorado representatives. This ensures that ICE knows that Rosa’s case and security are being watched by these other bodies. If it’s granted, then it can be attached to her application for a work permit.

How can I support Rosa right now?

On behalf of Rosa, RBH thanks everyone for your continued support. 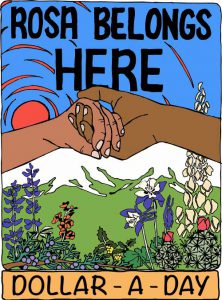 Help Rosa to survive financially through this time of resistance by donating $1/day each month for one year.

First, select your donation amount then click the button to complete your payment information at PayPal.

You choose the amount.

In the summer of 2017, more people had claimed Sanctuary in Colorado than any other state. That fall, four of us, Araceli, Ingrid, Rosa and Sandra, began to support one another across the miles. As we gathered our communities together, we identified a hunger to name the concrete steps elected officials can take now to Create a path to Status. The Sanctuary Four began consulting with lawyers, immigrant and faith communities to pull together simple, direct steps at the federal and state level to keep Colorado whole and strong. The People’s Resolution is the result of five months of work and study. 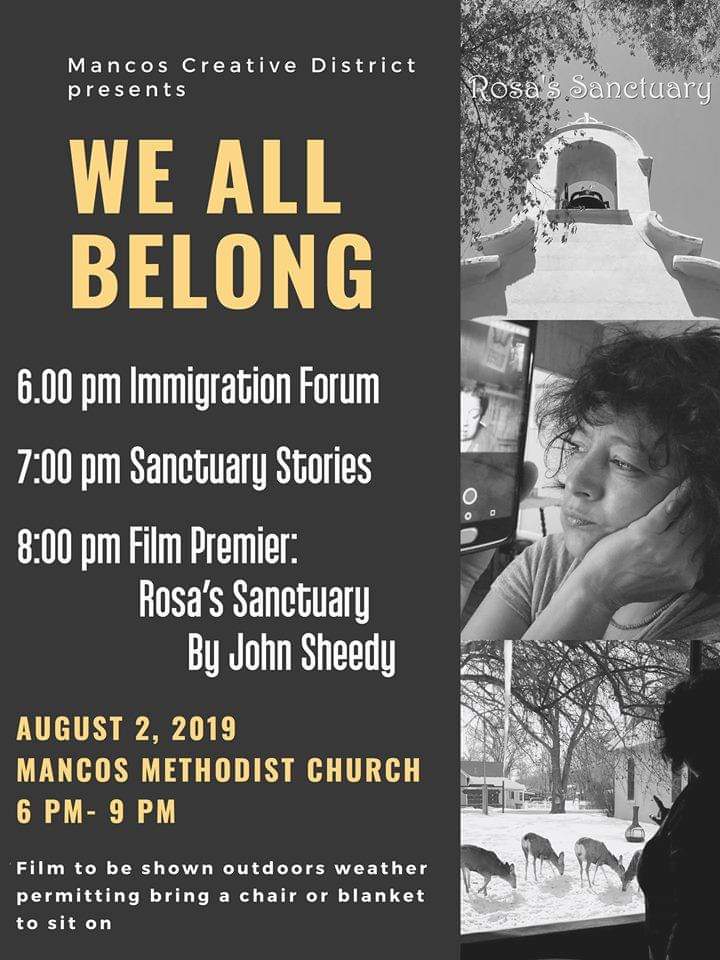 What is the Sanctuary Stories Project?

Rosa Sabido has lived in sanctuary for a little more than two years in Mancos United Methodist Church in the town of Mancos, Colorado.

In the span of that time, she has told her story over and over again to journalists and media outlets worldwide, from the BBC, to The Los Angeles Times,  to The Denver Post, to The Washington Post.

The facts are documented. Sabido, a Mexican national born in Veracruz and raised in Mexico City, has lived in the United States for more than 30 years. She went into sanctuary on June 2, 2017, after Immigration and Customs Enforcement (ICE) refused to grant her stay of removal request.

But no matter how often her story was covered in the media, and how much awareness has grown — the group that advocates for her case and immigrant rights, called Rosa Belongs Here, has more than 1,000 supporters who subscribed to receive updates — Sabido felt that there were parts of her story that were missing from the broader public narrative.

“Yes, they were kind of bringing our stories and how we live in sanctuary,” said Sabido of the articles published in various media outlets. “At the same time, there are parts in our lives and in our personal experiences that are more on the human side.”

Rosa Sabido has lived in the United States for more than 30 years. She works as the Secretary at the Catholic Church. For the past six years, Rosa has been granted a Stay of Removal by Immigration Customs Enforcement (ICE) until May 11, 2017, when the agency declined to grant her most recent request. Facing deportation Rosa sought “sanctuary” while she works to remain in her community in the country she calls home, and to care for her U.S. citizen parents. The community and the Mancos United Methodist Church vow to stand with Rosa in her effort to achieve permanent residency.

Her words: "I just want to hold on to what is invisible to the eyes, a stronger force that transforms the improbable to possible ... FAITH!"

“It’s hard to live in sanctuary without a job or a source of income. It’s also hard to accept the donations of others when I am used to supporting myself and my family.

"It’s difficult to focus on all the work that needs to be done in the Sanctuary Movement, work on my immigration process to stay in this country and worry about how I will pay my bills. My monthly expenses still need to be paid, no matter what. Because of this situation, even a donation of one dollar a day will make a big difference to me for the next year that I am committed to be here in sanctuary.

"I know that we are part of something bigger and the Sanctuary Movement is growing daily. My position here allows me to help raise awareness about the broken immigration system in our small communities and all across this nation.

"Sometimes our voices are heard simply by the sacrifices we make through our actions.”

Information from the American Immigration Council

How the U.S. Immigration System Works

Why Don't They Just Get In Line?

What makes a church a sanctuary? (Colorado Public Radio, 2017)

WHAT YOU CAN DO