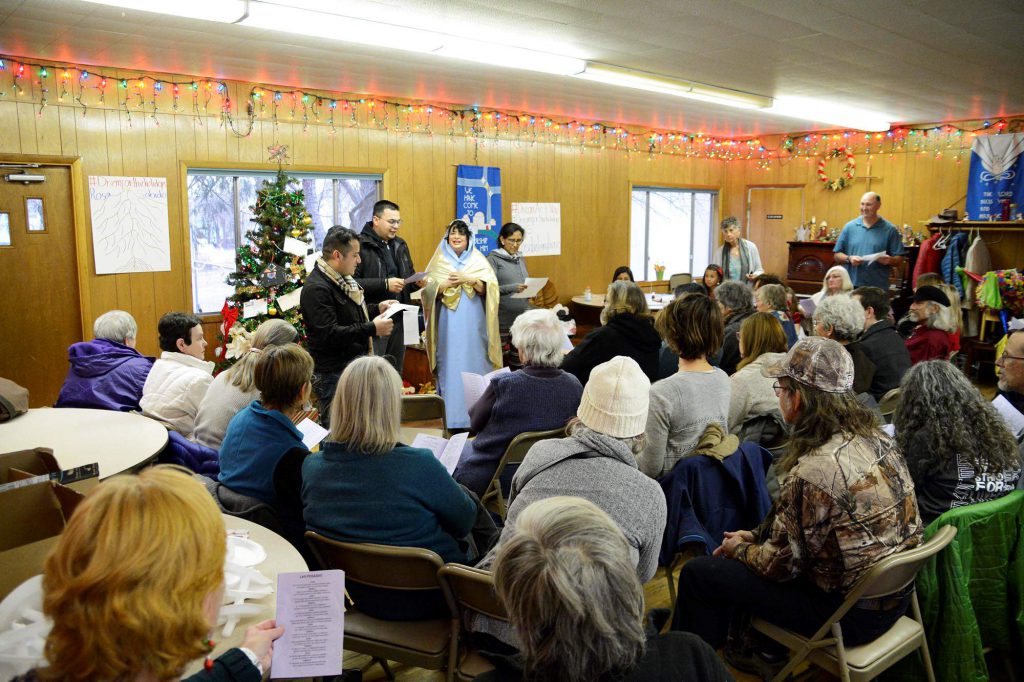 One of Time magazine’s 100 most influential people visits Mancos

The United Methodist Church on December 23, 2017, hosted Las Posadas, a Mexican Christmas tradition that re-enacts Mary and Joseph’s search for shelter before the birth of Jesus.

Jeanette Vizguerra, an immigration activist from the Denver area who spent 86 days in sanctuary earlier this year, spoke during the event.

After Las Posadas and a meet-and-greet with Rosa Sabido and Vizguerra, guests were invited to stay for a community Christmas dinner.

Las Posadas is a celebration traditionally held in Mexico during the Advent season. Two people dressed like Mary and Joseph go to different houses in a town each night and sing a song asking for shelter. The resident of each house sings another song denying the request, until the couple reaches the house belonging to the designated stable owner, who finally invites them in.

The ceremony in Mancos was an abridged version.

The crowd split into two groups, one going around to each door asking for a place to stay, the other singing from inside and rejecting them, until the last door.

After Las Posadas, everyone gathered in the yard to watch children tear down a piñata.

“How can I feel not loved with this many people,” Sabido said. “It brings some good into the sadness. Seeing their smiling faces happy and coming to be with me is wonderful.”

Sabido also highlighted that much like the event earlier this year that marked her first 100 days in sanctuary, this was a celebration of the community, not her.

According to a news release from the church, Dec. 19 was be the 200th day since Sabido, a Cortez resident, claimed sanctuary to avoid deportation. But the posada event was scheduled to coincide with Vizguerra’s visit. She visited Mancos as part of a tour through several Colorado sanctuary churches around the Christmas season.

Vizguerra is the founder of MUJERR, an advocacy group for migrant women. In April, she was named one of Time magazine’s 100 most influential people in the world for 2017.

The two women have been talking for months, sharing words of encouragement.

“In the past, I have one promise for Rosa, to come and support her case,” Vizguerra said in an interview with The Journal. “In the state of Colorado, there are five people in sanctuary, and one is Rosa. Rosa is part of the sanctuary movement, and it is very important to me to support Rosa’s case.”

Vizguerra said that with the current administration, her advocacy has become more difficult.

“In this moment, it is very important for people living in sanctuary and for resistance to cases,” Vizguerra. “Your house is here, your family is here, and your community is here.”

When asked what is next in her advocacy campaign, Vizguerra promised to continue fighting for immigrant rights, even harder in the new year.