Fundraising has been a big challenge for us over the past almost two years of Sanctuary. This creates a lot of stress for Rosa, as well as for us as a group. To help, Kris Abrams will be offering a skill building workshop for Rosa’s supporters.

Topics addressed will include

Benefits of the training

We envision this as the first in a series of skill-building workshops to revitalize the group. We are really excited about it!

Kris raised $1.5 million for Boulder-based community radio station, KGNU, in 7 months. She was the Director of Individual Giving at Global Green Grants Fund, an international environmental organization, and she coordinated individual giving at Urgent Action Fund for Women’s Human Rights. We’re really thrilled she’s agreed to share her experience and knowledge with us! 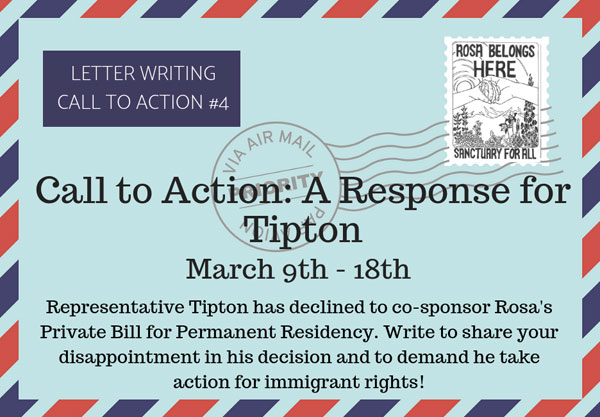 After a year and half, Representative Scott Tipton has declined to sponsor Rosa Sabido’s Private Bill for Permanent Residency. Join supporters across the state in writing and calling Rep. Tipton to share your disappointment in his decision and demand that he take action for immigrant rights!

Phone Script: My name is (name) and I constituent from (where you live). I am calling to express my disappointment and frustration that Rep. Tipton has declined to sponsor Rosa Sabido’s private bill. I expect him to recognize my support for Rosa and for humane resolution of immigration issues. I am asking Rep. Tipton to support Rosa’s private bill and to cease support for the President’s State of Emergency and inhumane immigration policies.

In mid-February, Rosa Sabido will mark her 600th day of living in sanctuary in the Mancos United Methodist Church.

What does it mean to live in sanctuary? And why would someone make a choice to do such a thing?

The church accepted Sabido on Friday, June 2, 2017. She is there because she does not want to be deported, something which is happening to people who check in for routine appointments with ICE (Immigration and Customs Enforcement).

Sabido, who speaks perfect English, was born in Mexico, but has spent most of her life in the United States, arriving in 1987 at age 23 for the first time, to visit her parents. She obtained a visitor visa.

Her mother, Blanca, who had divorced Sabido’s biological father when Sabido was ten, came to the United States in the early 1980s, and married Roberto Obispo, an agricultural worker living in the U.S. as a lawful permanent resident in Cortez. Obispo became a U.S. citizen in 1999, and filed papers that allowed Blanca to become a citizen in 2001. However, at that time, immigration law did not allow Sabido to be included as a family member.

When people hear about Mexicans living in the U.S. or seeking sanctuary to avoid deportation, many ask, “Why don’t they follow the laws and become a legal citizen?” But the pathway is often arduous, even impossible.

Sabido, now 53, wants people to know she is not a criminal. She has been trying to follow the complex immigration laws and become a legal U.S. citizen for more than 20 years. During that time the laws and regulations have changed, with each change bringing a new set of procedures to comply with.